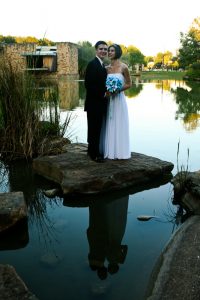 The first time Angela volunteered at River Legacy in November 2005, she was briefly introduced to a volunteer wearing a Minimizer the Recycle Dog costume. Little did she know that she was meeting her future husband. Over the next couple of months and years, their paths continued to cross at River Legacy where they volunteered on a regular basis.

Angela says, “I remember thinking, ‘I wonder if that guy will be here’ ” when she signed up to volunteer at Cardboard Boat Regatta. And of course, he was. Over the course of many more festivals, events and volunteer projects at River Legacy, they seemed to find themselves assigned to volunteer together. “It gave me a chance to learn his name,” Angela says.

David and Angela soon learned that they had similar interests and after one volunteer event went to see a movie together. In April of 2009, while walking along one of the wooded trails in River Legacy Park, David proposed to Angela.

It was only fitting that their wedding should take place where their relationship began. Angela and David received special permission to marry at the Science Center before it was an up and coming wedding venue! “Being able to marry my husband where I not only met him, but the place that our entire relationship grew from, was absolutely perfect!,” Angela says.

Today, River Legacy Living still holds a special place in their family. The couple continues to volunteer together and bring their two children to many of the festivals and educational programs that River Legacy Living Science Center has to offer. The two are also reigning champions in River Legacy’s Cardboard Boat Regatta Build-On-Site races!

Spread the love for Valentine’s Day! Share your River Legacy love stories — a favorite moment; a special place; a memorable meeting; a family pastime or tradition; an adorable anecdote; an outdoor adventure… Let us know what you LOVE about River Legacy by commenting below or posting on social media using the hashtag #LoveRiverLegacy!